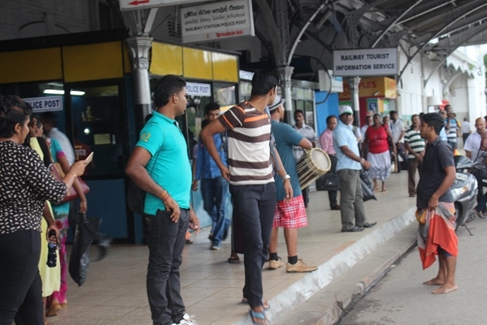 Priya, Navodhanie, Hiran and Sanjit constituted the team for the day. The locations covered were

On the final day, the team had to overcome bad weather and heavy traffic throughout the day, which forced a reevaluation of the day’s target locations.

The team’s first stop was the Colpetty market, where the street drama captured the attention of buyers and sellers alike. The RTI team capitalized on this opportunity and distributed dockets to curious and eager recipients.

The next location was the Fort Railway Station, which was the most important location for the Colombo leg of the awareness drive. Approval to use the RTI track and to distribute dockets had been sought beforehand. The street drama piqued the curiosity of a good crowd, and the team spent a long time at the station, engaging members of the public. There was some indifference, but also a number of individuals and groups that were very enthusiastic about RTI.

The final location of the day was Wellawatte. However, the rain returned, making docket distribution very difficult. Nevertheless, the team succeeded in distributing dockets to the public, and engaging individuals in conversation.

This brought the RTI awareness campaign to a close.